You know how life sometimes just takes over, and some things that HAVE to get done fall by the way side. Yeah you know, you get busy, things get neglected even though you really do have good intentions.

Like lets say for instance....
Um, the dead fish that may have floated in its bowl for lets say....
Um, the last week or so.

Awful hey,
Awful for the fish, really bad on my part. Particularly since I walk past said fish bowl say like 50,000 times a day, give or take.

Every time the kids mentioned it, or I saw the cats drinking from it, I really did mean to "fix it" but I got distracted.

Every darn time !
Not intentionally, but you know.... Life

So this morning I grabbed that bowl instead of walking by, I got that fish net out ready to flush that fish to his final fishy resting place. 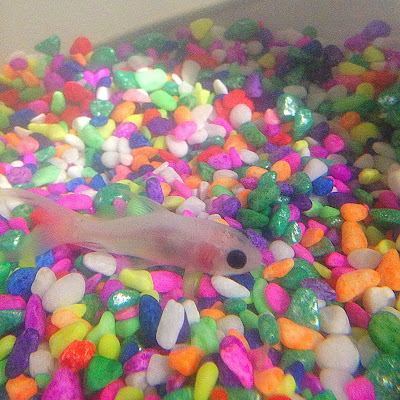 Its a miracle....
I feel really awful, that poor thing without a name has not been fed in days, because IT WAS DEAD.

Maybe fish are like cats and have more than one life, who knows, but I can almost guarantee that now this fish has been fed, named (Jesus) and has a super clean new bowl, it will most likely drop dead just to give me the finger.