It's been a while since the crafty crew went fishing, a family outing that has become a thing of the past. Old rusty rods and lack of time is no excuse I know, but at least I am admitting my guilt and I am prepared to mend my ways. More family time is high on my agenda for the new year, but hey, why wait till then ? I am no longer going to be the mum who says "not now boys" any longer, I have put too many things on the back burner lately and I am going to put a stop to it now !! we are going to live life in the fast lane in 2013.

So when the boys woke on Christmas morning to brand new rods and tackle boxes, the first thing they wanted to know was when are we going fishing ?

So this morning bright and early we packed the truck, and headed off to try out the new rods. Smiles were on faces, spirits were high, we are a family that loves to fish....the peacefulness, the togetherness, there is something magical and calming about throwing in a line.

It was windy, to windy to fish really. But that didn't stop us. The sky was fairly clear and the sun was peaking through so we decided to carry on in the hope that the wind would die down.

The boys were eager, they were on a mission to catch dinner, I was living in hope that, that would be the case, there is nothing like a feast of freshly caught fish.

After a refresher course on "how to bait the hook" from Dad, the boys found their own space on the beach to cast their rods, faces plastered in huge smiles and loads of determination to succeed.


Reminding the youngest crafty member many times over that to be able to catch something his rod has to stay in the water for longer than a minute or two he needs to work on his patience became my morning repetitive motto...the eager beaver was convinced he had a fish every five seconds so reeling in the line became his favorite pass time.

The fish were not biting, the clouds began to roll in and after about half an hour the rain came. We were drenched, but the boys determination was not, we continued to try our luck....
I gave up and walked the beach annoying the boys taking photos that's my prerogative 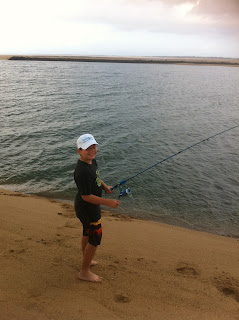 The rain continued to come and go, so did the bait with nothing to show for it. We decided to move on and try to find somewhere with a little more shelter, it was not to be.

In all honesty the quote "we did more fishing then catching" really applied to us today......

I don't know a whole lot about fishing, but I know that there is fish in that darn ocean, where they are is the issue.

We will return later in the week, when the rain has moved on and the wind has died down. I am determined that my boys will get the chance to catch em, clean em, cook em and eat em....

The fish and weather will not defeat the crafty crew !!!!