It's that time of year again, the Inter School Touch Football season has begun ..... and this year, following in his three big brothers footsteps, it is our little guys turn to strap on the boots, pull on a jersey and join the "Bullets" as they head for touch down glory. 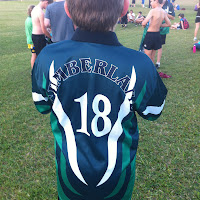 Game one was on Friday night and our team was full of excitement as they ran on the field, they went out hard and fast scoring within the first few minutes of the game...SCORE !! Kids were ecstatic, high fives were flying, the parents were cheering,fun was being had by all.
It was a close game, a fast game, but the Bullets kept their noses in front by one point the entire game and in the end the final score was 6 points to 5....
Well done boys, cant wait for next week, but remember its all about the fun and team spirit, not whether you win or loose.