Some time last week, when all the planets were aligned and I actually had some spare time to write. I published a post expressing my concerns for my second eldest sons lack of enthusiasm since graduating Grade 12 last year.  find it here

Since then, I am happy to announce, that things have taken a turn for the better thanks to some gentle nudging and he has been bouncing off the walls full of beans and excitement. 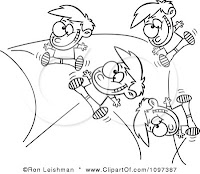 Thanks to our God above, I discovered an old news letter in the bottom of teen number three's school bag. Usually when said notes are found and dated back a few weeks, they are immediately tossed into the bin I hate clutter but for some reason I decided to take a few minutes to read and see if I had missed out on anything that may have been going on at the school.
On the back page under the heading "Community News" was an invitation for any past or present students who were interested in a career in the "Medical Field" to attend a University open night to learn more about the courses that would be running next year.
Knowing that my boy at one stage had expressed a keen interest in Psychology, I wondered if I should approach the subject of the open night and see if he would show any interest in attending.

I approached with caution !

I have recently backed off, giving him the benefit of the doubt that in good time he would work things out for himself.

To my surprise, he was totally up for attending and even asked if I would go along for moral support. I Immediately accepted his request.
On Tuesday night we set off together, my fingers crossed behind my back, that this may just be what he needed to bring back his spark and determination.

HALLELUJAH
My prayers were answered
I stood back and let him do the talking, I felt so proud as I listened to him asking questions and finding out as much as he could about the University course that interested him most. He was animated and showing general interest, my heart was singing because he was once again showing signs of happiness for his future.

Up until recently, Central Queensland University (CQU) did not offer any courses in Medicine. But as of this year, the University is expanding and slowly more and more courses are being introduced. Imagine our surprise when we found out on Tuesday night that as of next year Psychology is one of the courses being offered. When these words were spoken, he turned and gave me the most gorgeous smile. It was then that I knew God had answered my prayers.

So, as mid year approaches us fast can you believe its May already ? We are getting ready to fill out application forms and submit them to the University. My boy has decided that in 2014 he will enroll and aim to achieve a Bachelor Of Psychology. A dream he once had but let fade away when his confidence was shot down early last year.

I am of course having such a proud Mum moment which meant that I just had to share this news.

Since attending this open night on Tuesday, I have had time to stop and reflect on why he had changed his mind from studying at University in the first place, and I came to the conclusion that maybe, just maybe he was worried that he may have had to move so far away form his family, his friends and his comfort zone. I am not sure if this is the case or not, all I can do is express my delight in his new found happiness and be proud that once again his future is glowing as brightly as the stars in the sky..........

Thank goodness I took the time to sit and read that old school news letter.