As a child I was never really into sport, dancing was my thing and I played the odd game of Netball for the Primary School Inter Sport Competitions, and that was about as exciting as I ever got. As for High School, please...there was no way that I was going to sweat for anyone that just wasn't cool  And as for watching sport, well I am afraid that was never high up on my list of fun things to do either.

My how things change

Lucky for me, I was given the privilege of giving birth to four wonderful sons, and so over the years I have had to change my outlook on sport. The boys at one time or another have played it all. Soccer, Rugby League, Rugby Union, Cricket, Tennis and even Taekwondo and so it seemed that with such enthusiastic kids, I needed to brush up on my "ball skills" well my knowledge anyway.

I loved watching the boys play sport, full of action and their eagerness to fight for that sometimes elusive win. It was exciting.
But it wasn't until I saw my first "live"match of rugby League between the North QLD Cowboys and Newcastle Knights that I truly got into "the spirit" and became a full on sport junky !!
The Cowboys promptly became MY team and I follow them with pride. I sometimes get a little excited watching their games on TV and I may even make more noise then my boys :)

Anyway, today (yesterday) was a big day for my the club, not only was it their 18th birthday but it was the day that they were to announce whether or not JT (Jonathan Thurston for those not in the loop) was resigning his contract or moving on.
The tweet came through at 11.30 stating that we had to wait for a live broadcast that was to be shown at 1pm Can you believe it, we had to wait for another hour and a half for the news we had been waiting for, for months.

The countdown was on, I kept watching the clock, time went by so slowly. I waited.........

He came on the TV looking all gorgeous in his suit and tie and said those magic words. He was staying, the wait was over, he had recommitted to my the club for another four years ! 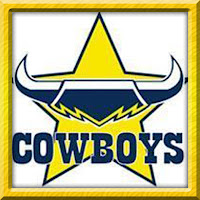 Linking up This fab Tuesday with the awesome Jess for IBOT
By Beck at March 12, 2013