If there is one thing that you can count on in life it's that at one stage or another, you will most likely suffer from a broken heart. 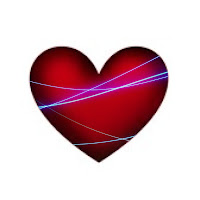 First love can be beautiful. It can also be brutal. And for a Teens first walk down the path of "love" it can be down right confusing.

For the past few weeks one of the Crafty boys has been on cloud nine. There has been much laughter, a willingness to help around the house a shock to my system and a smile so big it has made my heart sing. There has even been a truce called between brothers that has resulted in a lovely household quiet.  It was a joy to see my boy so happy teen boys are usually sullen and moody
All because of a girl :) His first girlfriend, he was so proud of himself. There was a noticeable positive change in his outlook on things and at that point it seemed as though everything was right in his world.

First love, so sweet, so magical, so memorable, but it can hurt.
Things can change in an instant !

Heartbroken, my big tough teen crumbled and tears were shed.
It was over.
My heart ached for him, it was a fight to keep my own tears from falling. This is my boy who usually only shows his "tough" side. It's not "cool" to be any other way (apparently)

It is hard to know exactly what to say when one is so down and experiencing something like this for the first time. Words can seem empty when a heart is broken, and advice often falls on deaf ears.

He took it hard, and was not himself. Laying around watching movies, keeping very quiet and his phone close, just in case......

I expected the old "I'm to sick to go to school" routine the next morning, however that was not the case. Unbeknown to me, the young lady in question did call him the previous night and things were slightly better, his spirits were up and off to school he went no problems at all thank goodness

I worried about him all day, but later that afternoon when school was done, a smile was spread across his face once more. It was "back on" and he confided in me that girls are "confusing" this is only the beginning my boy He still claims that he does not know what happened and why they "broke up" in the first place at least he is not telling mum anyway but thank goodness my smiling, happy boy has returned once more, for how long, it cant be known but I am going to lap it up for as long as I can.