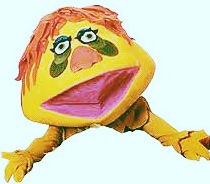 H.R. Pufnstuf
Who's your friend when things get rough ?
H.R. Pufnstuf
Can't do a little cause he can't do enough.


Silly song, silly show, but gee it brings back memories. H.R. Pufnstuf was a children's television show, that first went to air in 1969 and continued to produce until September 1971. This was before I was born ! Honestly, cross my heart.

The show was about Jimmy, a young boy who had in his possession a magic flute named Freddie of course All I ever wanted was to get my hands on that darn flute ! A flute that could talk and play tunes on its own........
One day Jimmy gets on a magic, talking boat wait it gets better that promises to take him on an adventure of a life time. Little does Jimmy know that the boat belongs to a wicked witch named Witchiepoo, who is using the boat to kidnap Jimmy, take him to the Island where she lives and steal Freddie the magic flute from him !!!

Thankfully Jimmy is rescued by the Islands Mayor, a six foot dragon named H.R. Pufnstuf. But of course This is where Jimmy's adventure begins, trying to get off the Island and return to his home. Many times over Jimmy must try and avoid being captured by Witchiepoo but with the help of H.R. Pufnstuf and his two deputies Kling and Klang, it seems that Jimmy and Freddie are able to out smart  Witchiepoo at every turn. 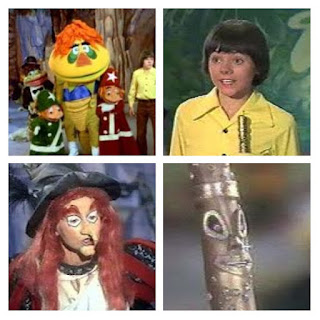 Ridiculous I know, but to this day I remember sitting at my tiny plastic table and chairs, with a glass of milk and a plate of cookies healthy kid to watch this show every week day morning.......

Do you think that my mum was after some peace ?

Mmmm no wonder I am slightly twisted LOL