Flashback Friday - ROXETTE - The Sound Track To My Youth

Hello you fool I love you !

For today's Flashback Friday I'm heading back to the 90's, re-living my teens and the band that had me and much of the world in a frenzy at the time........ 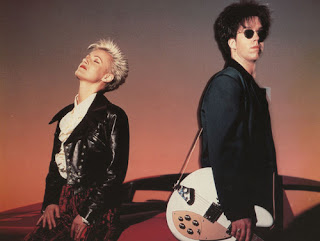 The band, a Swedish pop duo consisting of Marie Fredriksson and Per Gessle, formed back in 1986 and became a world wide hit when they released their breakthrough album "Look Sharpe".

Their songs became the "anthems" of the early 90's and you could not turn on the radio without hearing the duo's hits. Listen to Your Heart, Dressed for Success and the ever popular The Look. They were the songs of my early teens and the idols of my time !

Marie was responsible for me chopping off my long locks. And Per, well I thought he was a God lol.......

On December 7th 1991, I was lucky enough to attend "The Joy Ride". The world tour that took Australia and the entire World by storm. It was the first concert that my then boyfriend / now husband attended together.
It defiantly took us on a "Joy Ride".
Much to our excitement, we even made it onto the recorded "video" now that is showing my age that was filmed as part of the tour at the Sydney Entertainment Center. Our sons have had a giggle or two over the years when we have played it to show them that Mum and Dad are "Rock Stars" in their own right LOL........

(Unfortunately I have been unable to find any photos of us all dressed up in our 90's " Rock Star" finery).

So you can imagine my excitement when I found out that Roxette were on their way back to rock our shores last year. I was determined to be there, I wanted Hubby and I to relive a wonderful memory from many years past.

And so on Valentines Day 2012, 21 years later at the Brisbane Entertainment Center, we got to relive that wonderful memory when we attended our second Roxette concert.

It was like stepping back in time, we were teens again. The songs were a sound track to our youth.
It was most likely the last time we will ever get to see Roxette live, but the memories are ours to cherish for as long as we live.


Linking up with the ever lovely Cathy for another Flashback Friday Enjoy your Friday everyone !